As you can surmise, this day won’t come again, and its pattern matching not for 100 years.

I recall the song by Kate Bush from her Aerial CD: The pi song. Listen to the first 6:16 of it on youtube.

Have an otherwise uneventful day.

In this post, I would like to explore the more modern (since 1593) approximations based on infinite series.

Note: If the mathematics shown creates immediate “eye-glaze”, please skip to the Activities section, which is much more entertaining in comparison.

Here are two examples of each:

For those interested in mathematically (in)finite series, look at the following
List of Mathematical Series. Summed general expressions are given for series organized by sums of powers, power series, binomial coefficients, trigonometric and rational functions. At the top, there are subscripted letters and Greek letter functions (such a necessary annoyance) that are separately named and linked.

Over the years, many mathematicians have tried to evaluate a finite number of terms in an infinite series to approximate π.

Within the mathisfun.com website, there is an activity to guide you to find the approximate value of π. Look at π approximation

There is a great website, called the Pi Search Page that lets you enter your special number and it reports where, in the 200 million decimal places of π that it is located, how many times it shows up (including not at all) and how long it took to search (typically in `bb 1/5` of a second).

Go to π Search Page and interact with it.

This completes the technical and non-technical tour of π. Please let me know if I’ve missed anything that could be further explored.

π (say ‘pie’) is the lower case Greek letter symbol that stands for a number defined as the ratio of the circumference (C) of a circle divided by its diameter (d).

Circumference means the distance around something, like a circle or a polygon. A synonym would be perimeter. 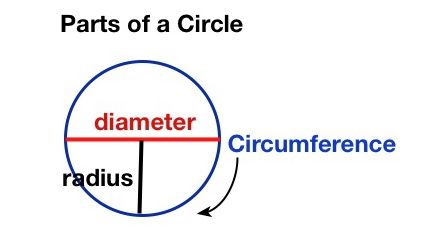 As a formula (no numbers, please), we write:

If d = 1 inch, then because π has a fixed, constant value, C must be equal to that value of π inches.

A closely related formula involving π involves the Area A, of a Circle and its radius r, (remember? – half of the diameter’s length). The formula is:

Most descriptions of π state when it was first historically used and trace a series of numerical refinements in its approximated value over the last 4500 years.

A chronology of the computation of π from 2500 BC (calculated as `22/7` ) to the present is shown in the following link: π Chronology

It shows the date, the person, milestone or event and the decimal value of π (or the correct number of decimal digits after 3.) up through October 8, 2014, when π had been computed and verified (anonymously) to `1.33∙10^13` (over 13 Trillion) decimal digits.

It turns out that π is an irrational number. (Johann Heinrich Lambert proved this in 1761.)

This means that we cannot discover a fraction that provides its value exactly. Writing its decimal digits never ends. So over the years, mathematicians have labored to compute π accurately to more and more decimal places using “good” fractions and infinite series where only the first “few” terms are evaluated and summed.

For non-algebraic equations, we have two equations from trigonometry, which use `pi/4` radians rather than 45 degrees:

and particularly its counterpart:

is used as a starting point for determining π more precisely.

Methods of approximation started with Archimedes, who, around 250 BC, applied the method of exhaustion with inscribed and circumscribed regular polygons to enclose the lower and upper bounds of area and circumference of the circle. Shown below are inscribed and circumscribed pentagons, hexagons and octagons (n = 5, 6, 8). Starting with a hexagon, he doubled the sides for inner and outer n-gons until n = 96, finding the inner and outer perimeters at each value of n.

Archimedes found bounds for π as:

Using the circumference formula [1], we can create a procedure based on one suggested by Rhett Allain (See:
Best Fraction For π to calculate a fraction that represents π for a given number of digits.

Here is the bash shell script that I wrote to program this algorithm. It takes slightly under 7.5 seconds (what’s your hurry?) to finish 500 iterations (on a 2010 vintage 32-bit MacBook Pro) and 3.55 seconds on a 64-bit GNU/Linux Server.

The script successfully finds the fraction

a close approximation to the reference π that is accurate to 6 decimal places. The percentage error using this fraction is 0.0000084913679%

In this script, the Linux utility bc is needed to offer/preserve 15 decimal place precision in the computations it performs. The shell facilities for operating with numbers using anything other than positive integers are minimal.

In my next post about π, I will write about greater decimal place approximators and Interesting π activities to try.

Oh, one last thing…
This is a delightful Math Trick attributed to Martin Gardner:

Write all 26 letters of the alphabet, but start with the letter J as shown:

Then, remove all the letters that have vertical symmetry as shown: